“The Stars and Stripes are nailed to the North Pole” 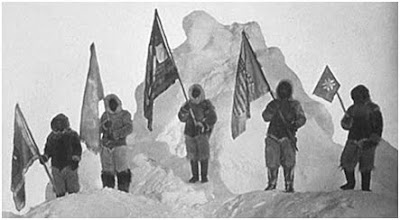 It is an old tradition for explorers to plant flags. In 1492 Columbus planted Spain's flag thus establishing a pattern in the New World. Spanish, French, British and American explorers carried flags on their expeditions. Over four centuries after Columbus, Apollo 11's crew planted the United States flag on the moon. Two twentieth century polar explorers, also following this practice of "planting" the U.S. flag. Robert Peary carried the flag during journeys deep into Arctic regions, and almost two decades later Richard Byrd also carried the flag during a flight over the South Pole. Interestingly, the claims of both polar explores drew skeptics. Also interestingly, both men displayed the Stars and Stripes in somewhat unorthodox ways. While both men intended to honor the flag of their country, their handling of Old Glory may seem curious today. Some might even consider their display of the flag desecration. Yet, it should be remembered that the U.S. Flag Code was first created in 1923, and it was not until 1942 that the Federal Government adopted it. 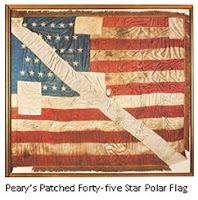 In 1898 Peary's wife made a forty-five star United States flag for her explorer husband. The forty-five star flag was the one adopted when Utah became a state. On Peary's several arctic expeditions, he often carried the flag wrapped around his body under the top layer of his clothing. Reaching objectives he would break out the flag, "planting" the flag at locations all over the far North. Actually, his idea of planting the flag was quite literal. He would then cut a rectangular piece from the flag and "cache" it at the site. Upon his return from each expedition his wife would inset a piece of white material to replace the "cached" part of the flag. At lectures he displayed his flag to dramatize his Peary's Patched Forty-five Star Polar Flag exploits. In poetic words he announced to the world in 1909 that he had reached the North Pole, "The Stars and Stripes are nailed to the Pole."

At a 1910 Hudson-Fulton Celebration in Elmira, New York, Peary's "North Pole" flag drew the unwanted attention of an attorney named Roswell R. Moss. He filed a legal action charging Peary with flag desecration. Peary's lawyer filed a demurrer maintaining that the law cited was unconstitutional. A demurrer is a legal term for a challenge to the form of the charging document. It does not consider the merits of the case. The court sustained Peary's position and dismissed the charge.

In 1954, Peary's widow presented the flag to the National Geographic Society. Today, the patched flag is preserved as a treasured historic artifact.

These two examples may appear to be strange attempts to honor the flag. They certainly don't seem to follow the rules of the United States Flag Code. However, the Flag Code states in summary, "No disrespect should be shown to the flag of the United States of America . . . ." Certainly, neither man intended any disrespect for the flag. Rather, both explorers made the Stars and Stripes a part of their proudest accomplishments. The flag was important to them. They carried U.S. flags with them and "planted" them in the Polar Regions of the globe.