O’ Columbia Gem of the Ocean 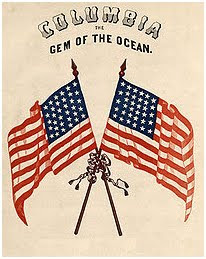 Famed as the first ship to carry the Stars and Stripes around the globe, the Sailing Ship Columbia Rediviva is commonly known as the Columbia. Indeed in 1773, this merchant ship was christened simply as the Columbia. This designation was and is a poetic nickname for the United States and honors Christopher Columbus. Columbia was rebuilt in 1787 and given the added Latin name Redivivia meaning revived. The ship's full formal name thus translates from Latin roughly as "land of Columbus reborn." There is something symbolic in her full name. The Boston Tea Party took place the same year the Columbia was first launched. The struggle for independence was then beginning. The Revolution ended in 1784 by the Treaty of Paris, and thirteen British colonies had a rebirth as an independent nation. Three years later, Colombia Rediviva departed from Boston carrying the flag of the newly independent United States of America, indeed she lived up to her name Columbia reborn.

The voyage began on September 30th of 1787. From her rigging, Columbia Rediviva flew a flag displaying thirteen stripes and thirteen stars. Her voyage took her around South America to the Pacific coast of the continent where she discovered, named and explored the lower reaches of the Columbia River. Continuing westward across the Pacific, she made her way around the Asian land mass and Africa back to the Atlantic Ocean. Finally returning to Boston in 1790, she had circumnavigated the globe displaying the Stars and Stripes to the world. 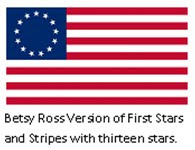 What did the U. S. flag look like that was first carried around the world? We don't know exactly. There were many versions of the first Stars and Stripes. The pattern of stars existed in many variations. The stars usually had five points. Nonetheless, stars on flags sometimes boasted six or more points. Even the stripes showed variety. The flag was most often a red field with six white stripes. In this arrangement the top and bottom stripes are red. Still, a white field with six red stripes was not unknown. Then, the top and bottom stripes were white. On occasion, the stripes were even red, white and blue.

A replica of Columbia Rediviva plies the waters of Disneyland's Rivers of America. She flies the version of the thirteen star flag that is best known, today. Usually called the Betsy Ross flag, this flag displays thirteen five-pointed stars in a circle. Common for most of our nation's later history, this version was uncommon during the revolution. Some flag historians have even asserted the ring of thirteen stars was not contemporary to the American Revolution. However, it appears to have been used. Also used occasionally, was a circle of twelve stars with the thirteenth star at the center. More common is a pattern of stars in rows of three, two, three, two and three. Less common but also used, the stars appeared in rows of four, five and four. Any one of these star patterns could have been shown on the flag carried around the world by Columbia Rediviva. Nevertheless, the voyage lasted more than a year and more than one flag was likely used.

Columbia continued under sail until salvaged in 1806. Yet, she still served as inspiration for the nation. Three U.S. Navy vessels have been named for the Sailing Ship Columbia. Disneyland in 1956 launched a replica of Columbia to honor the vessel. In 1969, the Apollo 11 command module for the first lunar landing bore the name Columbia. The space shuttle Columbia became the world's first reusable space craft flying space missions beginning in 1981. Tragically, she and her seven astronaut crew perished on reentry in 2003. Only Disneyland's Columbia continues in service having sailed the waters of Frontierland for over fifty-four years. 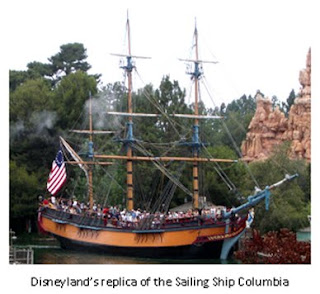 In 1843, Columbia Gem of the Ocean appeared as a patriotic song that still inspires Americans. The song missed being selected in 1931 as our national anthem. It was beat out by another song with a flag connection, the Star Spangled Banner. In the song Columbia the Gem of the Ocean, its name serves as a metaphor for the nation or ship of state. Still, the song concludes with words that must echo shouts that greeted Columbia Rediviva on her return from circumnavigating the globe, "Three cheers for the red, white, and blue."

Posted by John M. Hartvigsen at 1:00 PM No comments:

The Flag's Own Right

When the National Flag Conference of 1924 established the rules of flag display, the believed that they were following the rules of heraldry in determining how the flag should be displayed. The upper left of the shield is called the dexter chief, and is the most honorable quarter of the shield. A square portion of the dexter chief is called the canton. In heraldry cantons are often awarded by the monarch as augmentations of honor to commemorate some notable achievement. The committee, therefore, decided that the union of stars would always be displayed in the dexter chief or canton corner of the flag. That is why the union of stars is often called the canton. That is also why the blue starry field is always displayed in the upper left-hand corner when the U.S. flag is hung flat on the wall.

To explain such inconsistencies, romantic stories often emerge. Two such romantic stories to explain flag draped coffins appeared. First, and most often related, is the explanation given by Colonel James Moss, a respected flag historian: "For generations the customary way of indicating death, the opposite of life, has been to reverse objects." The second story, also described by Moss, "Another explanation—a romantic one—is that the soldier having devoted his life to his Country, the Flag of his country embraces him in death, necessitating the flag facing the soldier which places the blue field to the Flag's right, which is the same as the right of the observer who faces the casket." The second story is harder to understand. Basically, if the flag—as does a person—has a left and right, it has a front side and back side. It the flag is flipped over reversing the position of the canton, then the flag is facing down and symbolically embracing the fallen soldier. Nice stories, but likely an incorrect explanations.

There is another understanding of heraldic rules that was dismissed by the committee. This view is actually the better one. The rules of heraldry were promulgated to facilitate the designing and display of shields and crests. Some rules can be and are applied to the display of flags. Other rules of heraldry do not neatly apply to the design or display of flags. A vexillologist (a student of flag study) could argue that flags should not be viewed as a subsection of heraldry. Heraldry and its rules do not control vexillology. 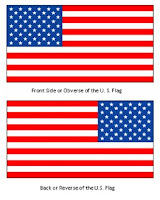 To begin with, a flag is not a shield. A flag has two sides, a front or obverse and a back or reverse. A shield has a front, but the reverse side carries no design. The back of a shield simply has the straps by which the shield is held and wielded. So, when a shield is displayed, it is never flipped over to show its back.

The U.S. flag has a front and back. Many believe that the front and back of the American flag are the same. Nonetheless they are actually different. The back of the flag is the mirror image of the front. When the flag is displayed on a wall with the stripes running horizontally, we see the front or obverse. When the stripes run vertically, we see the back or reverse of the flag. 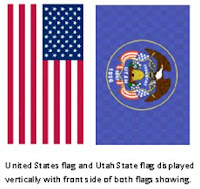 Had this interpretation of heraldry been adopted, we would simplify things by always displaying the front or obverse of the United States flag. Whenever the flag is rotated to change the direction of the stripes from horizontal to vertical, the union would move from the observer's left to the observer's right. This would have the added advantage that when flags include lettering, such as the with the Utah State flag, they could be displayed uniformly with the U.S. flag without words and designs appearing backwards.

This explains the origin of placing the stars over the deceased left shoulder when the flag is draped on a casket. It is simply done to show the front of the flag. Many draped flags have been banners bearing royal arms or other coats of arms. If the design were flipped to place the dexter chief over the right shoulder of the deceased, the reverse of the flag would be displayed. The design would be backwards. The place where a person stands to view the casket determines how the flag appears. The most important thing is to show the front of the flag.

At the right is a picture of the coffin of Denmark's King Frederick IX. The front the flag is displayed. The same pattern in followed in the United Kingdom. The United States military no doubt followed the European pattern for draping military caskets with flags.

Heraldry and the flag's own right? There is more than one way to look at it. The National Flag Convention of 1924 might not have picked the best interpretation.

Posted by John M. Hartvigsen at 7:33 AM No comments: