The Lineage of the Stars and Stripes

Some assume that because of our revolutionary past, that the Stars and Stripes sprang into existence on June fourteenth of seventeen seventy-seven, almost an act of spontaneous generation. Nevertheless, the flag of the United States has a lineage that stretches back to European roots. Like all genealogies, it has some lines of descent that are proven by the historical record. Some lines are less certain when records are incomplete or missing. Some purported pedigrees may be based on false claims resting on coincidence rather than relationship. Finally, some ancestry remains undiscovered.

As with the thirteen original colonies, the flag's parentage rests with Britain. They saw England in a very real sense as the mother country. The United States flag inherited at least three things from this parentage. First, the national colors of red, white and blue. Second, a flag divided into two parts: a field and a canton or union. Third, the very idea that the flag symbolizes a political union.

"What do the colors signify?" Congress apparently gave no thought to the meaning of the colors when the flag was first adopted. Red, white and blue were simply inherited from the British flag that came before. Where, we may ask, did these colors originate in their British use? The colors came from the flags of England and Scotland.

England's flag of St. George is a red cross on a white field. By legend Saint George, England's patron saint, slew a dragon to save a maiden. George carried the white shield of purity and innocence. Dipping his lance into the dragon's blood, he outlined a red cross on his shield. English medieval soldiers wore St. George's cross front and back to identify them in battle. Thus red and white come from England.

Scotland's Cross of St. Andrew also supplied two colors: blue and white. Saint Andrew suffered crucifixion on an X-shaped cross, know in heraldry as a saltire. Seeking divine intervention in battle, the ancient Scots beheld an X-shaped formation of white clouds against a blue sky. Victorious, they adopted this sign as their emblem. Thus Blue and white come from Scotland.

In 1603 England's virgin queen, Elizabeth I, died and King James VI of Scotland inherited the British throne. At the beginning of his reign, each of his two kingdoms flew their own flags. St. George's cross in England and St. Andrew's cross in Scotland. Conflict arose at sea. Sailors from each realm competed to fly their own flag in preference to the other. To end the conflict, the king's heralds designed one flag to symbolize both nations. They simply superimposed the cross of St. George over the cross of St. Andrew. This formed the first British Union flag, known familiarly as the Union Jack. This union, however, was the personal union of two kingdoms with one sovereign. Political union of the two realms followed in 1707. 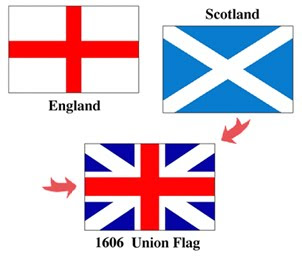 In heraldry, a shield is often divided into four parts or quarters. They are numbered one through four, beginning in the upper left had corner and rotating clockwise around the shield. The first quarter, is considered the most honorable. It is closest to the sword arm of the knight as he would carry the shield. The canton is a named smaller division of the first quarter. Perhaps like the heart of the watermelon, the canton is the best part of the quarter. British nautical flags also made use of the canton. At one time, British ships were identified as being part of the red, white or blue squadrons. Squadrons flew colored ensigns matching their designation. In the canton of each colored flag was placed the cross of St George or the cross of St. Andrew as appropriate for England or Scotland. These gave way to placing the union design in the canton.

By the time of the American Revolution, the British Red Ensign had become the merchant flag of the British Empire. This flag was the most used by the colonists before their break with the mother country. The colors, the canton and the concept of political union symbolized by the Red Ensign furnished the model for the flag of a new nation. Colonists replaced the red field with thirteen red and white stripes. The British Union gave way to a new American union device, thirteen white stars on a blue field, a new constellation. Just as a constellation rises in the night sky, the new nation rose to take her place among the nations of the world.